To find the light, sometimes you have to dive head first into the dark.

Sìne (SHEE-na) Peril has the dubious pleasure of being born at least fifty years after her skill set stopped being marketable, and also knowing she would not survive in pre-WWII society.

She grew up in a Gothic novel, in an isolated portion of Ohio which has influenced much of her writing and sparked her interest in history. She has a keen interest in the rights of women and the plight of the mentally ill, disabled, poor, and people of color in the Victorian era.

When she is not writing, she satisfies her desire for time travel by volunteering as a living history interpreter at a museum, where she specializes in women’s rights from 1860-1900. and by crafting historical costumes. For research purposes, of course.

Her first novel, OFF THE RAILS, was released in 2018, and is the first book in a series. Her second book, BY THE GRACE, is scheduled for release on October 6, 2020.

Upcoming Events:
There are currently no upcoming events or appearances scheduled. If you have an event you would like to see me at, or think should be on my radar, leave a comment below!

Upcoming Releases:
There are currently no schedule releases. Check back in January for 2022 news.

Contact:
The best way to reach Sìne is by emailing PerilousProse (at) gmail (dot) com. 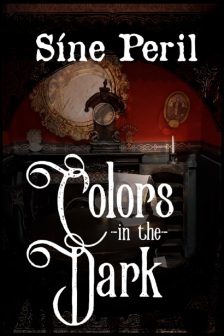 COLORS IN THE DARK

Eileen, “The Spirit Princess of New York,” has spent her life on the stage, supporting her family just as her mother and grandmother before her. And like her predecessors, she knows that one day her powers will drive her insane.

But while traveling in London, Eileen meets the Temple siblings, a brother and sister who show her there might be another way–a way that doesn’t involve stage dramatics and bending to the every whim of her father and grandfather. A way that might allow her to truly be herself with the woman she loves for the first time.

The longer Eileen is in London, the more she realizes that her family isn’t want it seems–and there might be hope on the horizon, after all, if she’s brave enough to make the change. But what will it cost in the end?

It is difficult enough in this age of awareness to be autistic, but in 1918 it didn’t yet exist as a diagnosis.

With no vocabulary to describe her experiences or explain why certain things bother her, Julia Grace must navigate the social minefield that is Mt. Sinai School for Young Ladies. She leans on her best friend and roommate, Ada Brooks, for support. Ada, who loves her despite her quirks and acts as interpreter for the social cues Julia is prone to missing.

But when Ada is found dead one morning before classes all that crumbles. To make matters worse, the police don’t seem to care, saying she was “asking for it” and they don’t want to prosecute the boy responsible. Maybe that’s why Ada’s spirit can’t rest and continues to roam the halls of the school, growing increasingly angry and violent.

Enraged, Julia sets out on a mission to find the killer and make him pay. But the influenza pandemic sweeping the country—and the entire world—is closing in on their isolated corner of Ohio, and it’s only a matter of time before it breeches the walls of Mt. Sinai. If Julia has any hope of accomplishing anything, she’ll have to win over her classmates and get their help in her plan.

Sophia Andrews was fully prepared for her husband to die fighting for the Union–or at least, as prepared as one can be for such an eventuality. She was not expecting him to be murdered in cold blood on the streets of Washington D.C. just before mustering out.

Though the Army would have her believe Confederate sympathizers killed her husband, a deathbed visitation from his ghost and a conversation with the only witness convince her otherwise. Sophia launches her own investigation, uncovering a plot to seize her husband’s railroad company and making herself the killer’s next target.

Faced with the choice between signing over the company and risking not only her own life, but that of her daughter, Sophia puts it all on the line to draw out her husband’s murderer. While suffering from a mysterious illness, she follows the trail of the killer from her home in Buffalo to an isolated sanatorium and checks herself in. She must find the evidence she needs and escape before the killer ensures she’s locked away forever.