I think it goes without saying that the past few months went just slightly sideways.

It’s partially my own fault. I didn’t give myself enough time, but after finishing the first Giftmas sweater in record time, I was feeling overly confident. Sure, I can knit a men’s XL sweater in 4 weeks! No problem!

Even knitting as fast as I could every single day, I was still only on the first sleeve when I landed in Ohio. And I’d just started the 2nd when I left, the day after New Years.

After a month of intensive knitting, I couldn’t even bear to look at the sweater by the time the plane landed in Seattle. I had other deadline projects to finish, so I kicked this one under the bed for January and tried to pretend it didn’t exist. We’ve all done that with a project now and then, right?

It was a tragic state of affairs, and I still feel guilty about how late this is.

The yarn is Knitpicks Might Stitch in Navy, and I used 7 balls. I needed something not too expensive, warm, that would wear well and be machine washable and dryable. I’m not sure how this yarn is going to fare in the “hard wearing” category, but it ticked all the other boxes and the recipient has already been warned that while machine washable and dryable is possible, the sweater will last longer if washed on a delicate cycle and laid flat to dry. But in a couple of weeks I’ll probably hear that he wore it while wearing paint stripper or something, so my caution and my knitting may end up being entirely useless.

I did something a little different with this sweater and used Russian joins to attach balls, instead of weaving in ends. This saved a lot of time and hassle. I hate weaving in ends. For a little artistic detail, there is a purl stripe that runs from shoulder to wrist, and another on each side of the body, though they did not photograph well. Since the model is on the other side of the country, I didn’t have anyone handy who could fill it out properly.

The zipper is a 7″ metal zipper I found at Joanns on sale. Ideally I would have gotten a 6″, but they didn’t have one in that length available and the metal zipper teeth were too chunky for me to cut this one down, so there’s a bit of excess zipper inside the sweater. I also trimmed and then melted the ends of the nylon attached to the zipper to prevent fraying. Pro tip: This part should be done before sewing the zip in place. Don’t do what I did and risk melting the entire sweater. 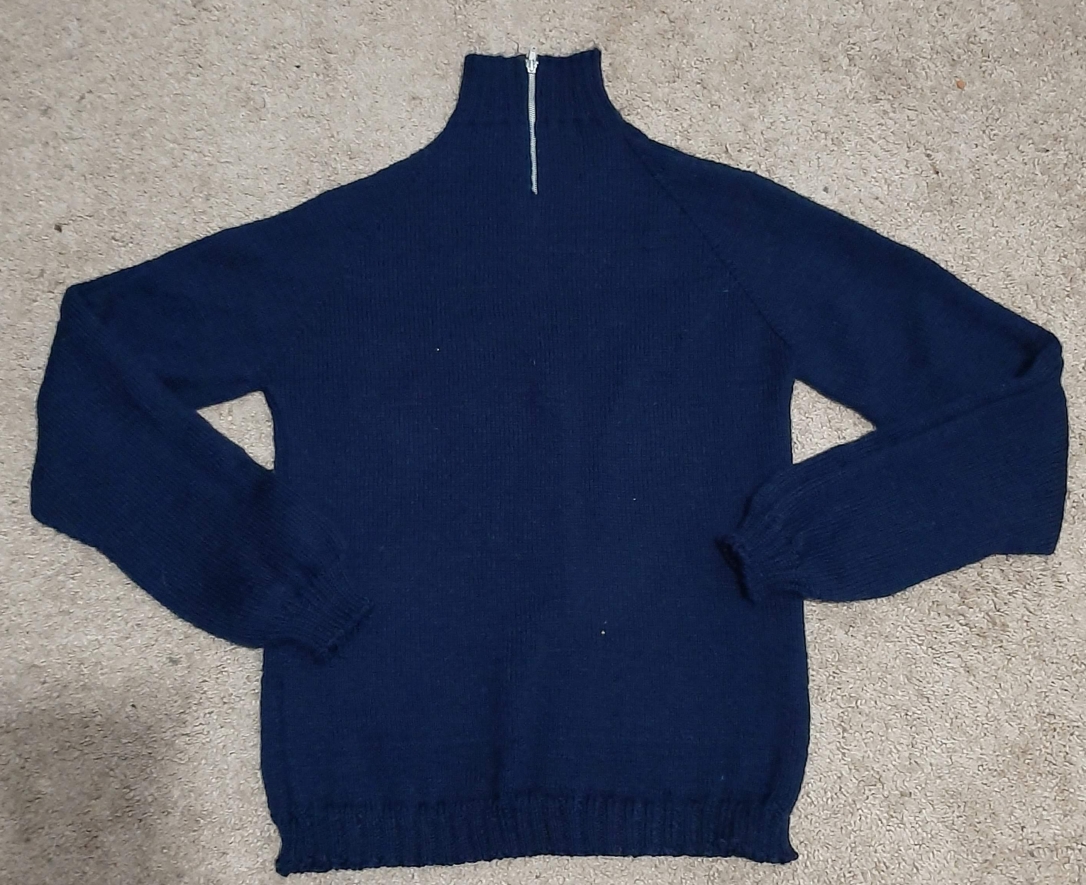 Like what you see? Check out the Shop tab above for my patterns, or check out Giftmas Knitting I