Pure silliness taken from my Twitter feed. For more stuff like this, why not follow me? Or check out my Instagram feed for gratuitous cat pictures. I can be found on both as @knotmagick.

It is a truth universally acknowledged, that a kitty in possession of a great floof, must be in want of a belly rub. This was not true of the first Lord Fluffington, but luckily for us this story isn’t about Loki the Murder Kitten.

Instead, it is about his younger brother, who inherited his title, his floof, and his poofy pants. But thankfully, none of the murderous tendencies. 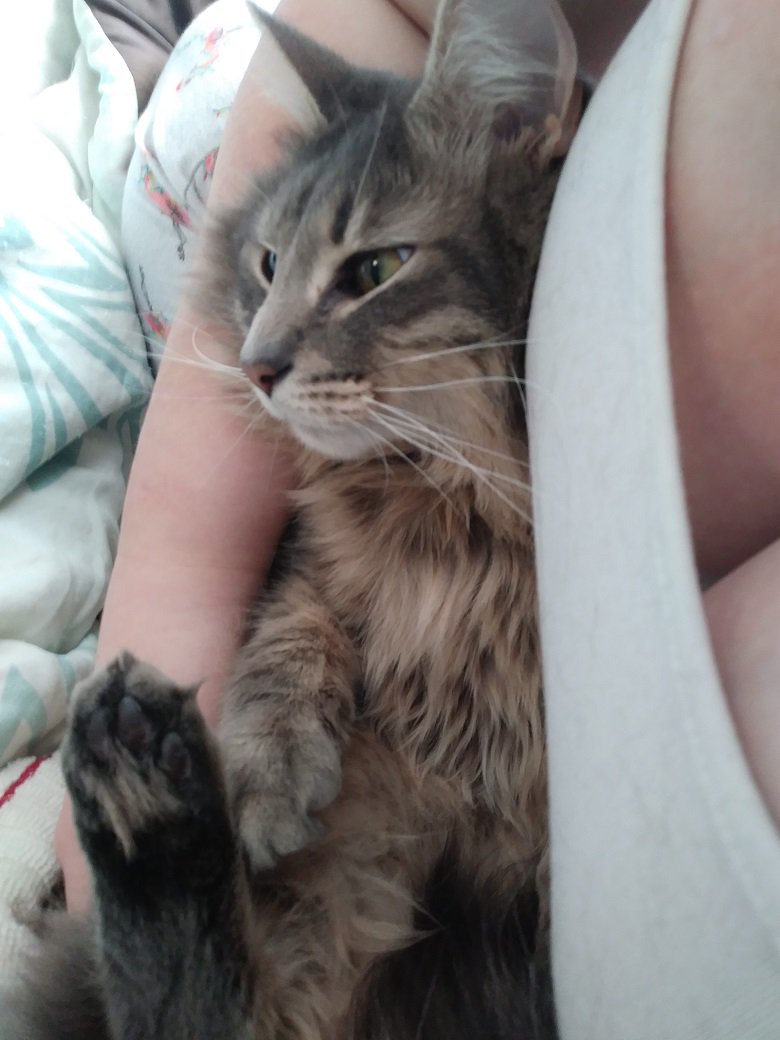 Unlike most overlords, Lord Fluffington loved his tenants. Mostly because they provided him with more belly rubs than even he could handle.

But wouldn’t it be nice, he thought, if there was someone to SHARE the belly rubs with? Someone to hunt with? He tried to interest his step brother, Baron Hermes von Fluffalump, but was met only with disdain. 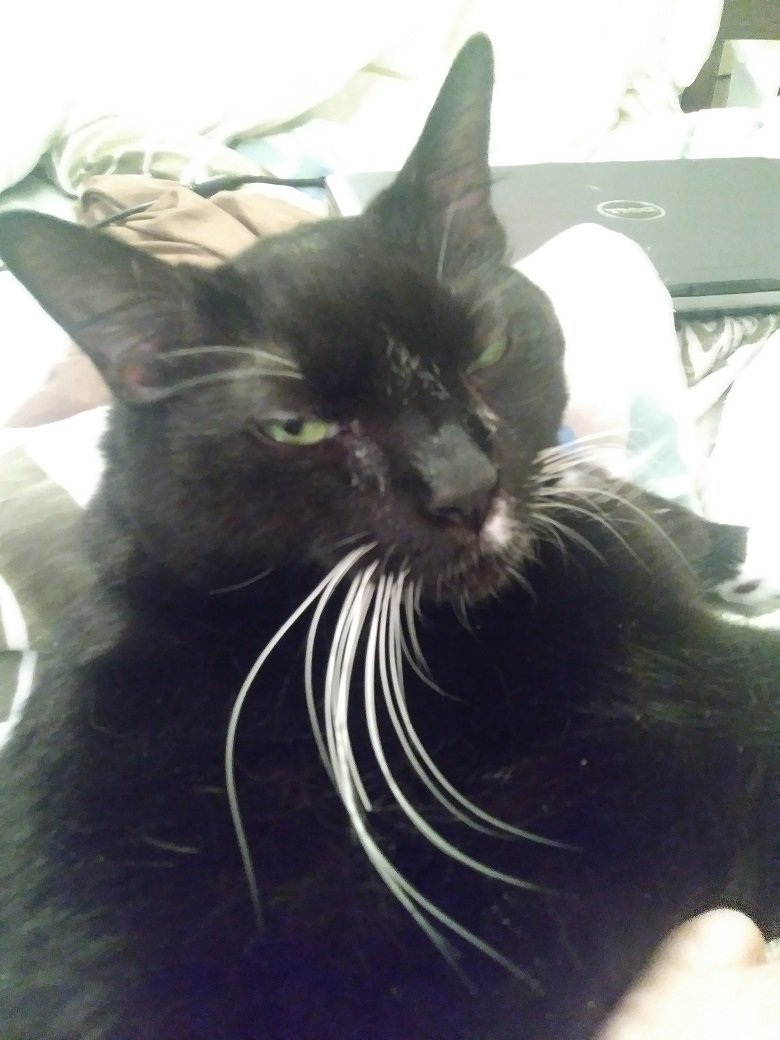 The Fluffington (Couchington) and Fluffalump (Mount Bedfort) estates had long been rivals, as they were very close neighbors. In fact the lines were in contention dating back to ancient times, and no one had been able to settle the disagreement.

Things truly came to head when Bastet was named heir to the Fluffinton estate, but that is an entirely different story. Anyway, Lord Fluffington I and Lord Fluffalump finally came to an agreement of mutual ignoring.

But that is a tail (ha!) for another day. This is a story not of the estates, but of Lord Fluffington and his quest to find someone to share his estate with.

The sudden loss of Lord Loki Fluffington was a terrible blow to the estate that left the tenants in disarray and unable to complete even basic tasks. It was clear something needed to change immediately.

If the new lord wanted to ensure the prosperity of the estate, he would need to act quickly. (But maybe not too quickly. These are important decisions.) (Screw it. Just a quick one for the road and then we’ll get to work.) 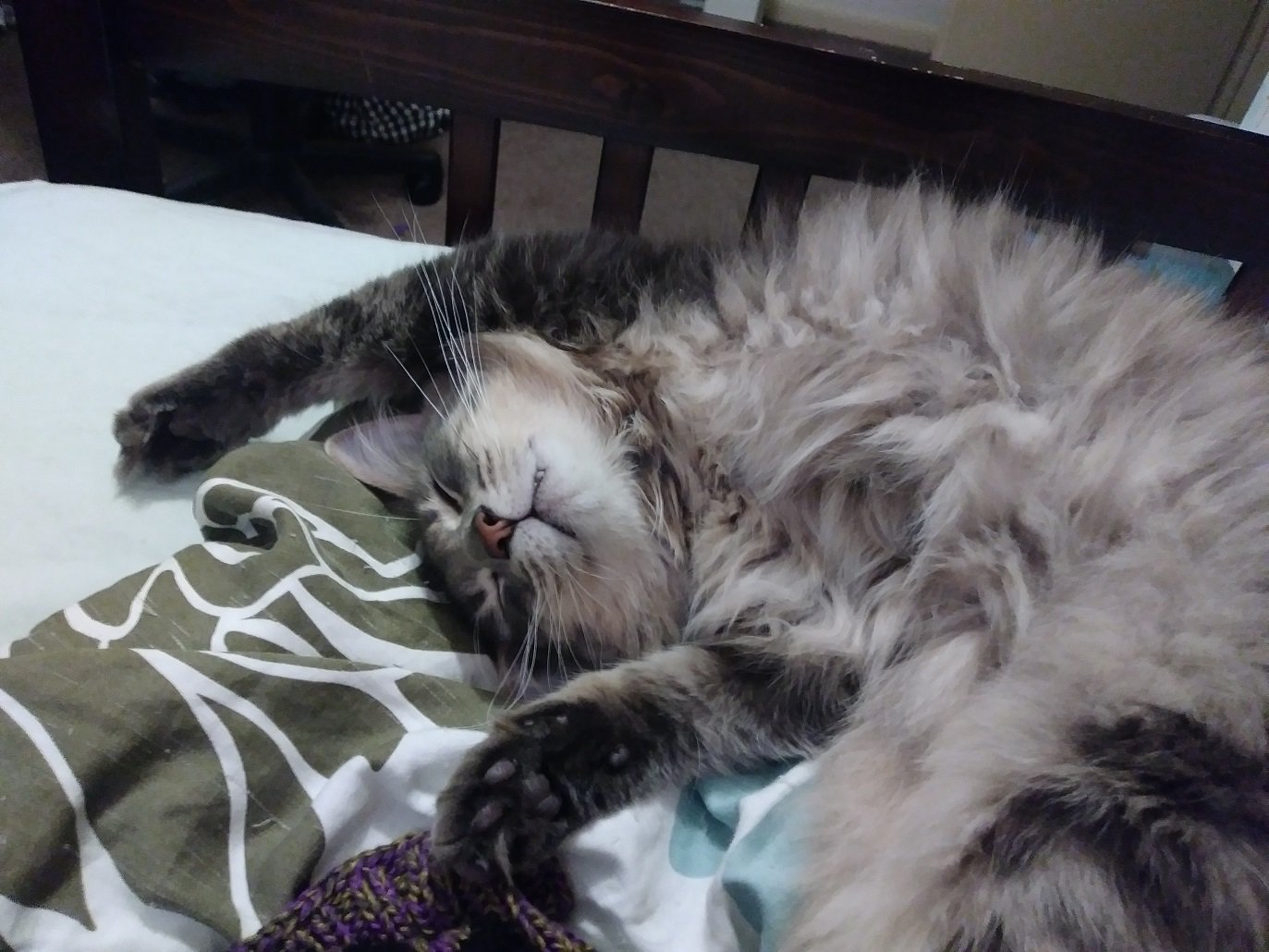 He sent his servants and tenants out far and wide in search of an appropriate companion, while he himself searched closer to home. Like in the basement. Because where better to find a companion than where his elder brother spent most of his time?

Finally, the renters returned. And they had with them… The purrfect companion. 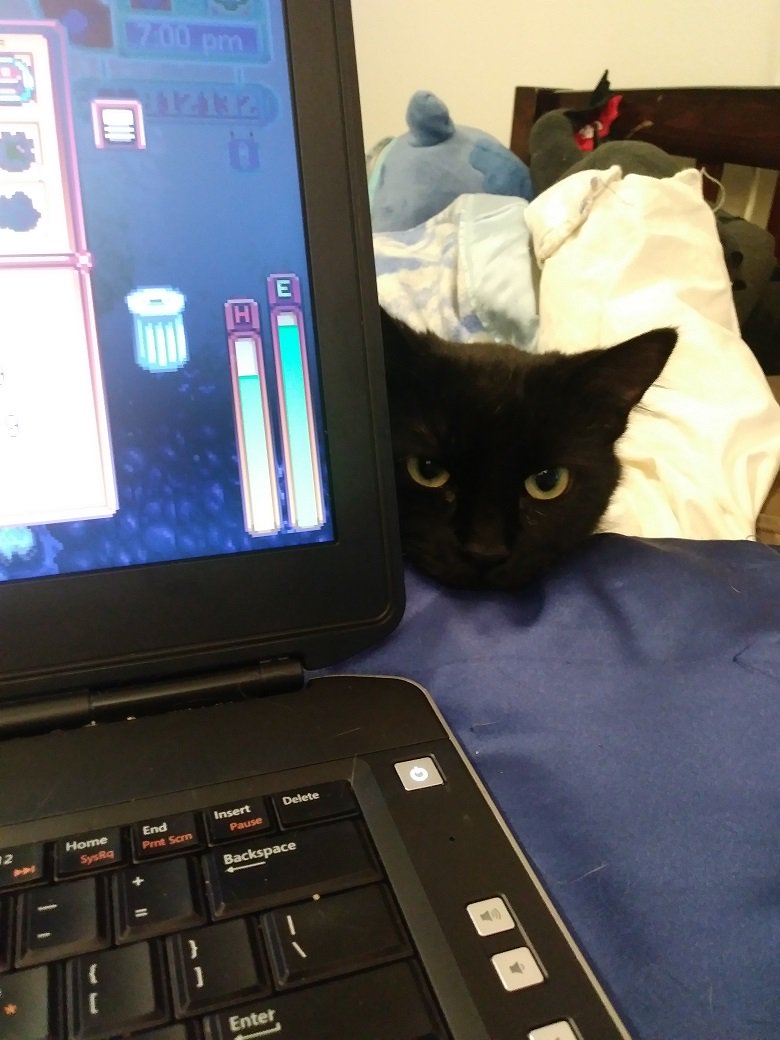 Lady Morrigan of the Void was small and petite, with regal bearing and experience commanding a household. She resembled her distant cousin Lord Fluffalump, and the hope was that the union of the houses of Void and Fluffington would finally bring peace to the two estates.

Fluffington and Lady Morrigan had much in common. They were close in age, both enjoyed hunting and warm snuggles, but the lady too much wooing before she would deign to spend time with even a lord of Fluffington’s great floof. 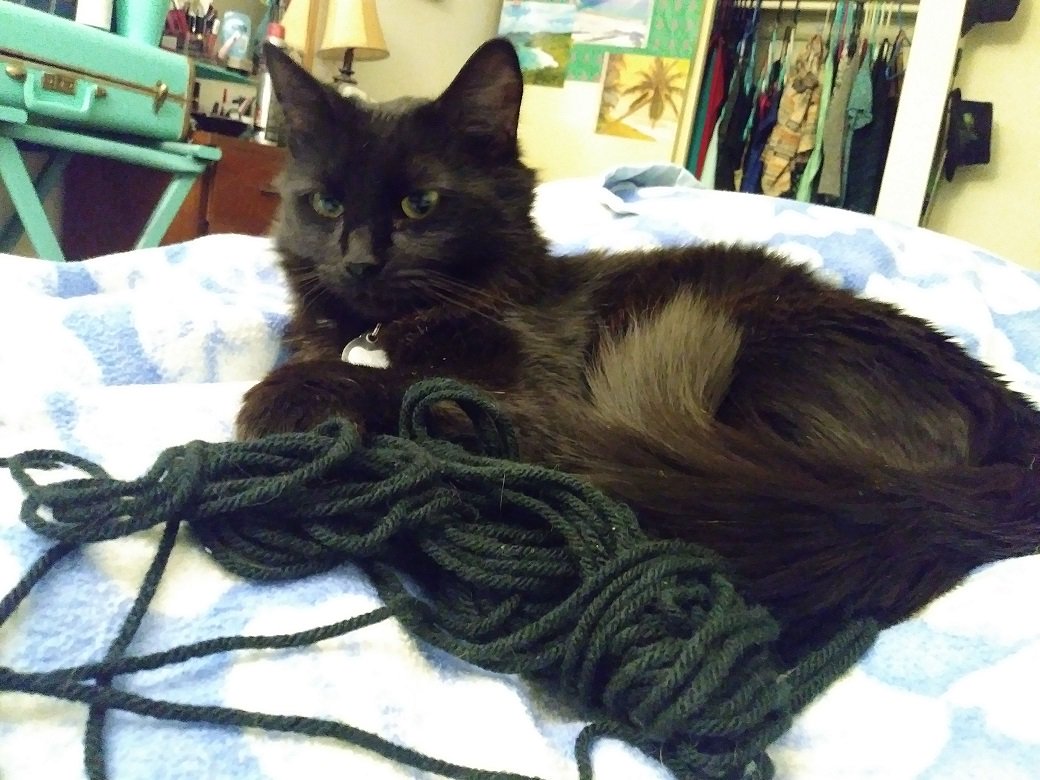 He threw all of his great fluff and the resources of his entire estate into winning her favor. He brought her mice. And ribbons. And jingly balls. But after only a few days she vanished from the estate entirely. Lord Fluffington was devastated.

To lose his dear sweet Void so soon after the loss of his beloved brother! (Nevermind that Loki would have cheerfully chucked him off a cliff. That, too, is another story.)

He feared that Lord Fluffington had run her off, and faced him in challenge.

Bast: “Um…did you scare my girlfriend?”

Bast: “Okeydokey.” (I said Bast was fluffy, not that he was shrewd.) 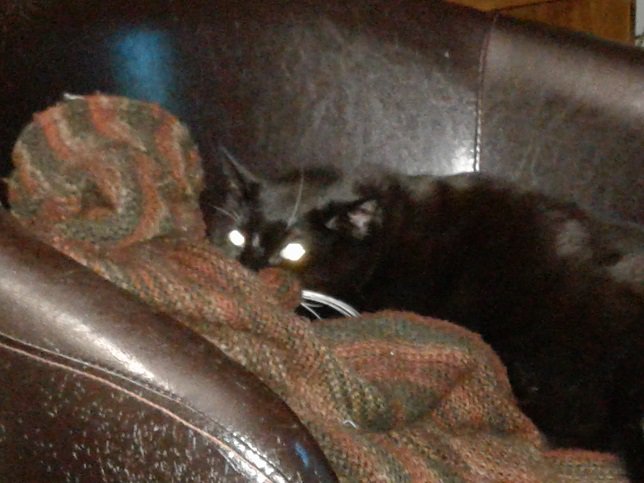 (Then again, this picture is less “disdain” and more “murder” so maybe he’s smarter than I gave him credit for.)

Once again, he sent out his tenants to search every corner of the estate. He would not rest until Lady Morrigan was found and returned safely! He left offerings of tuna and gushy foods and even precious nip, but nothing could draw her out.

The search party began to fear the worst. They prepared for the possibility that the family memorial may have two new residents instead of one. Or that Lady Morrigan had simply run off and would never be seen again. But then–! 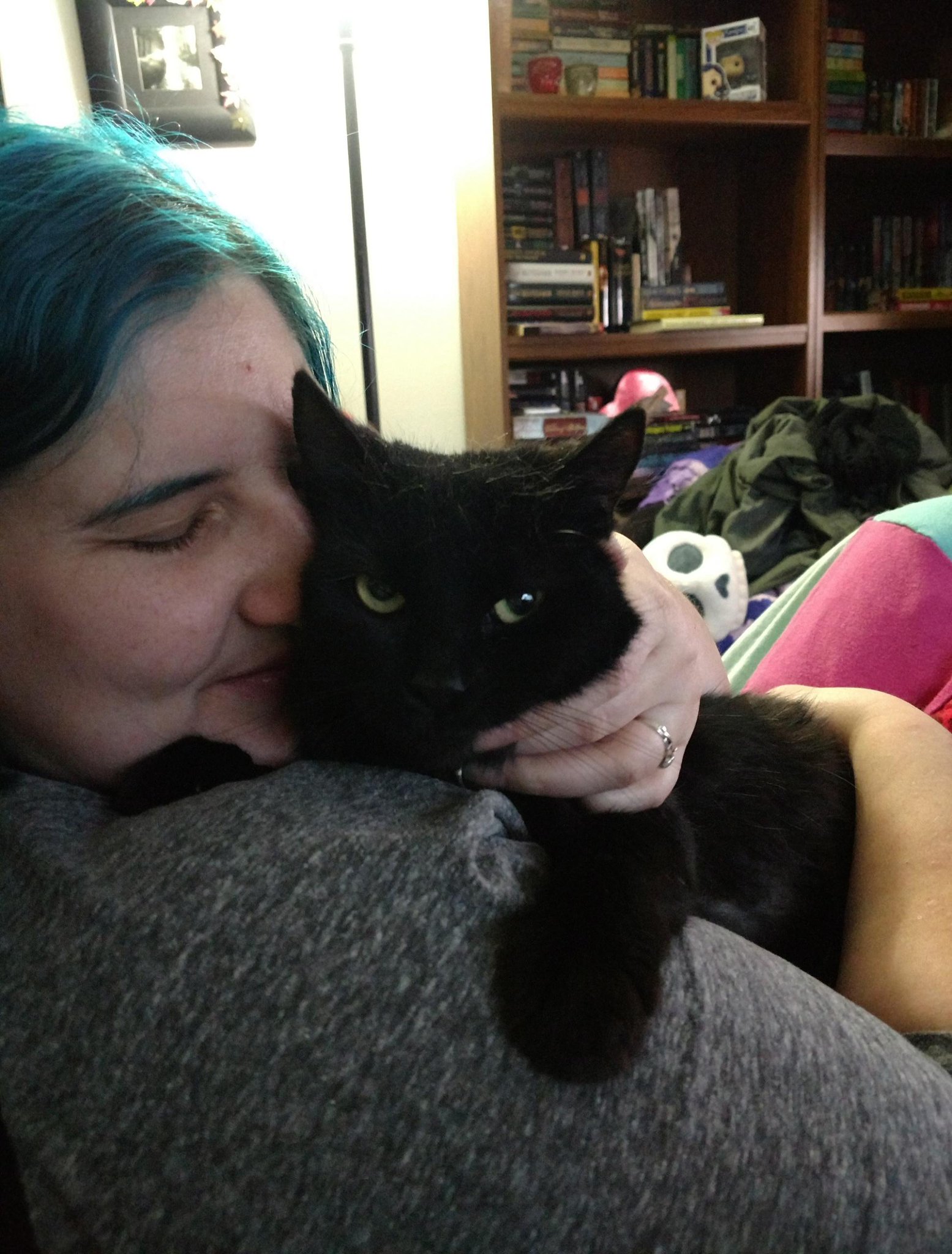 The servants returned with the good lady in tow! A great ball and feast were had in her honor. Once she realized that the people of the Fluffington estate, and even Lord Fluffalump himself, meant her no harm, she was willing to take her place beside Lord Fluffington.

And so the future of the estate was assured, and the two of them continue to oversee Couchington with a fluffy paw. 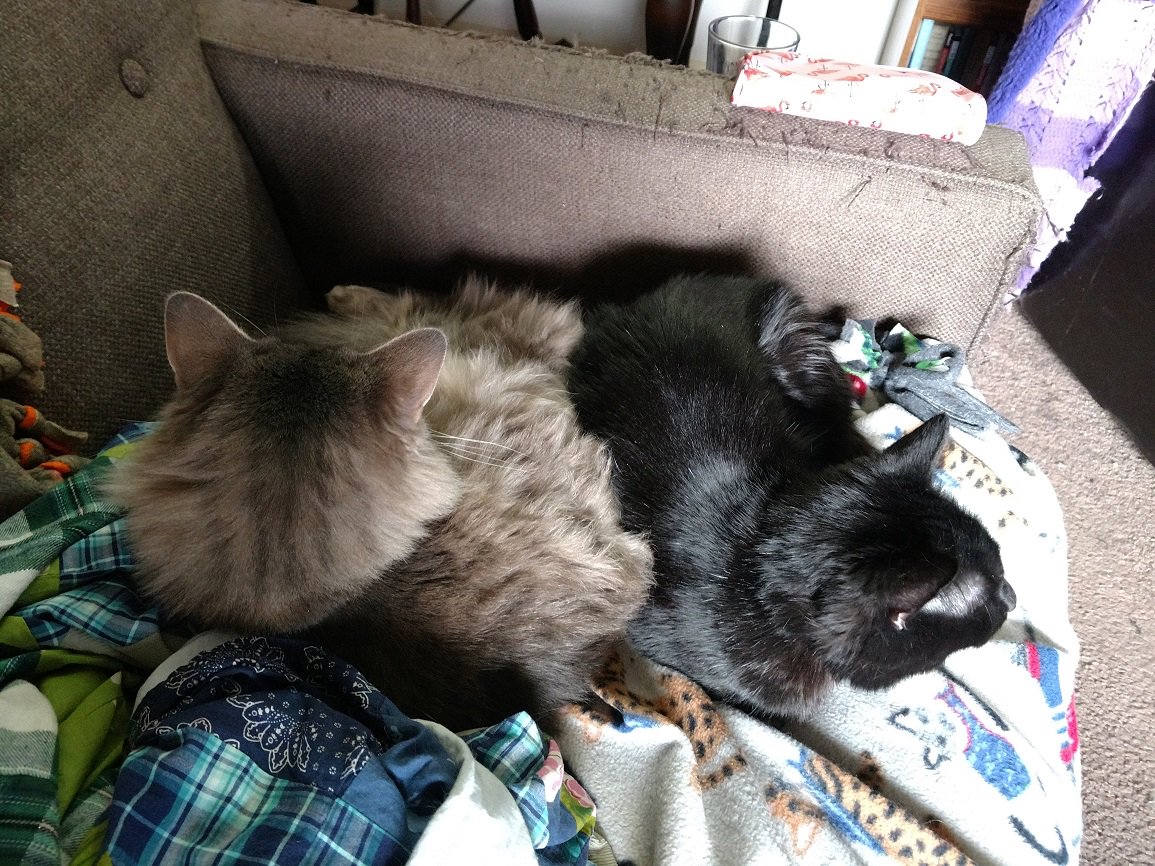