Colleen moved the end table from the chair by the fire behind me, arranging the empty basin and other tools she would need.

She began by letting down the plait. With a towel wrapped about my shoulders, she applied a mixture of egg yolk, rosemary, and water with a brush. She piled my hair on top of my head, wrapping it in the towel. Once more able to look down at my hands, I flipped through my diary and my lists of daily tasks while waiting for the egg mixture to set…

…“Time to rinse now, Mrs. Andrews,” Colleen said cheerfully, bustling back into the room with a steaming pot of strong, black tea and a pitcher of clean water.

I leaned back in my chair so she could loosen the towel, dropping it back down around my shoulders. Unwinding my hair into the wash basin, she poured tea mixed with a splash of vinegar over the strands to rinse out the egg, gently massaging it into my scalp. The tea had the added bonus of helping disguise some of the strands of gray coming into my hair. I didn’t consider myself especially vain, but I’d been somewhat annoyed to discover the first one just after James left. They’d only gotten more numerous since.

One last rinse, this one of plain water, and the washing was complete. She patted my hair dry with a spare towel, combed it once again, and then began working it into my usual style: a straight center part, with two braids looping over my ears and back into a braided knot at the nape of my neck.

–From OFF THE RAILS

It’s no secret that people in the 19th century lived to a different standard of hygiene than we are used to now. Even members of the upper classes would’t bathe more than once or twice a week, and a lady only washed her hair a few times a month, if she was fastidious.

The Civil War marked a turning point in terms of health and hygiene. Thanks primarily to the work of Clara Barton, in advocating for clean, well ventilated spaces for those recovering from illness or injury, the care of those with compromised immune systems began to improve.

Also around this time Louis Pasteur published this germ theory–that illnesses were spread by tiny creatures called “germs” rather than “miasma” (bad air) as his predecessors had always believed. While this was not a new though–it was also proposed by Girolamo Fracastoro (1546) and Marcus Von Plenciz (1762), it wasn’t until the 1850s-1860s that research began in earnest. Alas, it would be another 30 years before germ theory began to edge out miasma theory in popularity. Even into the 1910s-1920s and the outbreak of the Spanish Flu many people still believed the illness was caused by “bad air.”

All of that to say, bathing wasn’t high on most people’s priority list, especially those int he poorer ranks of society.

Most people washed their hands, faces, and necks every day, using a wash basin in their bedroom. The soap, if they used any, was usually harsh lye soap, made by the family or another local household that might sell it for extra income. City dwellers (like Mrs. Andrews) might have the opportunity to buy a softer, gentler soap that was scented with roses or lavender.

Baths would be taken once or twice a week, probably in a hip bath, or even just the laundry basin. It would be filled and heated once, probably in the kitchen (closer to the fire and the well/pump) and then the entire family would take turns, starting with Dad, then Mom, then moving through the children until finally the youngest got their turn. Depending on how many people were in the family, and what kind of life they led, it’s questionable if the youngest was cleaner before or after their bath!

Obviously, people in the 1860s couldn’t just go down to Walmart and pick up a bottle of shampoo, some conditioner, and maybe a bit of hair spray or gel.

Instead, the same soap used for washing would be used on the hair. For ladies, such as Mrs. Andrews (OFF THE RAILS) or the main characters of ALL FOR ONE, hair care would be close to what is described above. Many homeopathic sites still advocate for this style of hair care. Egg masks are commonly recommended as the proteins leave hair shiny and smooth. Rosemary and other aromatic herbs are used (think of these as the forerunners of Herbal Essences).

The tannin in tea have many health benefits, both in and on the body. They help condition the scalp (fighting excess oil and dandruff), and the tea itself is a natural colorant.

Another thing to keep in mind is that in this period of time, head covers were de rigeur. No one would dare be seen outside their home without some kind of hat or bonnet. Ladies were large brimmed bonnets or straw hats to block the sun and protect their collection, and men favored bowlers or Derby hats. In the summer, they might opt for a straw boater. 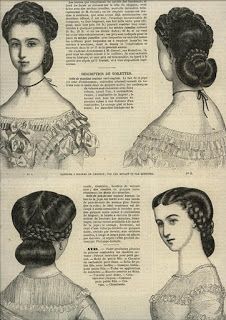 Even indoors, women generally covered their hair, especially after marriage or being widowed, wearing small lace caps when receiving visitors. A bonnet or straw hat could be pinned on top of these bits of lace for going out, so even when visiting her head would not be uncovered.

Lastly, the hairstyles of the time were generally very slick, so having a bit of grease in one’s hair, as much as it might be disgusting to us today, would be an advantage for controlling flyaways and even protecting the hair from curling tongs heated on the fire place–at least to a small extent.

I find the fashions of the past fascinating, not just in terms of clothing, but hair, make up, decorating, and manners as well. Stay tuned for more historical info!

Like what you see? Check out Netflix Binge: Historical Fiction