How Outlining Helps Me When I’m Anxious or Depressed

When I started writing, I didn’t outline, and I’m not saying it’s required. However, outlining has helped me face challenges with recent projects. I have periods of time where I lack motivation or the act of writing feels too overwhelming. It doesn’t help when I have approximately thirty stories on the backburner and no clear focus on which one I want to try to complete. I struggle with depression and anxiety mostly in the summer and winter months. This can make writing difficult. However, I’ve found ways to help myself. Here, I’ll talk about why I outline and the steps I take to make writing easier, especially during hard times.

E.L. Doctorow once said, “Writing is like driving at night in the fog. You can only see as far as your headlights, but you can make the whole trip that way.” Though I do enjoy when my imagination runs wild, I’m a very plan-oriented person. I love having some structure going in because it causes less pain when I’m going back for rewrites. There are almost always changes in the story I outline, but ultimately I’m able to keep the story true to the character arcs and themes I’ve written out. This lessens the anxiety of approaching a project with multiple possibilities. Also, if I’m feeling demotivated, having a plan to start with makes it feel like less work to get started because I’ve already put in a great deal of the effort.

Something to Lean Back On

When I outlined a recent story in April, though I didn’t start working on it till July I had the satisfaction of knowing I had a plan and wouldn’t be going in completely blank on ideas. I know my characters. I know what they want, and I know how to make them struggle to get what they want. If I lose motivation halfway through the story, I have a guide to follow.

Now, for the advice. It’s important to note that when you outline, you’re figuring out the story, not the plot. The story is both the plot and the character(s). You can have a great premise and a cool aesthetic (trust me, I just rediscovered Pinterest), but the story is the most important part of a book. Personally, I categorize story elements with something I call “the three C’s”: character, conflict, and consequences. Here are some of the questions I ask myself while thinking about the story’s skeleton.

Character: What does the character want? What do they need? (These are often different or in conflict?) What is their goal? What are they willing to do to achieve their goal?

Conflict: What gets in the character’s way? What are the internal and external obstacles?

Really hone in on making achieving the goal as difficult as possible. Often, the internal conflict comes from doubts or a clash between what the character believes they need to do (their want) versus what they actually need to do.

Consequences: What will happen if the character fails?

The consequences should be serious and make the stakes high. However, it’s important to note that the consequences don’t always need to be death or the world ending. They should be of extreme emotional significance to the character. Many romances often don’t have death or the world ending as possibilities, but the readers become invested in the characters’ relationship because the author builds up the relationship to show what the characters have and what they’ll be missing forever if they do not end up together.

Because it can be overwhelming to summarize an entire story, I choose to break up the important beats with one to two sentences. While this challenges me to get to the heart of the story, this pays of in the long-term and saves time on massive rewrites. Nothing’s worse than having twenty drafts of a meandering story (been there!) or several hundred pages you’ll have to cut and reconsider.

The most important part of building scenes is thinking of cause and effect. Stories are a buildup of conflict, so rather than thinking of an outline as a series of events (“and then this happened and then that happened”). When I construct one-sentence summaries of scenes, I think of them as “The character did this, and therefore ______.” That, or “This character did this, so _____.” Much like building up an argument in a paper, the story’s events should be tied with a “therefore” or “so.” You don’t literally need to put “therefore” and “so,” but it helps to think of each scene as building off the previous one. When I didn’t do this, a lot of my stories became vaguely related vignettes. All the scenes build up the story.

Writing is hard when you’re stressed, especially when you have a chronic illness. Productivity feels impossible. Sometimes, it is good to take a writing break and refresh yourself; it doesn’t make you less of a writer. Anyone who says otherwise is ignoring obstacles they don’t personally understand. Everyone has a different process.

If you’re interested in more about how to create a story, Lisa Cron’s Wired for Story helped me learn how to create a story. I hope this helps writers who get overwhelmed and distracted, especially because of mental health struggles. After I adopted these methods, I still struggle, but I become frustrated far less and often feel calmer knowing I have a plan in place for my future projects. 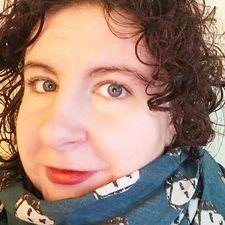 Emily is a graduate student at Kennesaw State University. After earning a B.A. in English at KSU in 2017, she currently works toward her M.A. in Professional Writing. During her work as a social media intern and coordinator for the KSU Writing Center, she began research on studying the health benefits of reflective writing in academia, presenting what she learned at the Southeastern Writing Center Association Conference and the KSU Symposium of Student Scholars. She currently works as the editor for the English Department’s newsletter The Broadside and interns as an editor for the Kennesaw Journal of Undergraduate Research.

You can find Emily in the following places: