You see, last Friday an interview I did with Dianna L. Gunn on her blog went live. It was a great interview, and I loved doing it. We talked about mental health representation in fiction, asexuality, and how the two influenced the writing of the book.  You can read the full text here.

Anyway, we started chatting on Twitter in between promo posts, when another writer popped into the thread. Some of you might be familiar with Shira Glassman. She’s also a former Torquere author, and her book THE SECOND MANGO has been on my to-read list since before it came out.

But I digress. Shira asked what the Jewish connection was in the book.

I was more than a little confused. While Adam, Evie’s best friend, is Jewish, it’s only hinted at in the book and isn’t really a part of the plot since he isn’t actively practicing the religion (though he is racially Jewish).

I wondered if the book had been mis-tagged somewhere. Was it on Amazon? Or something in the interview? I quickly checked both pages, but couldn’t figure out where she’d gotten the idea that The Spider’s Web was a Jewish book. I tried to say that it wasn’t the case, afraid I’d cause offense. While we do need more Jewish rep in the book community, those aren’t the books I write.

Shira was wonderful, and pointed out that the logo for the Montreal Night Patrol (left) was a six pointed star. Somehow, that fact slipped past both Missouri and I. Ha ha, I thought. What a funny coincidence.

To me, there is nothing wrong with this image.

I am not Jewish.

At this point in the conversation, another user jumped in, clarifying that it wasn’t necessarily the 6 pointed star that was the issue, but the all-seeing eye inside the maple leaf: 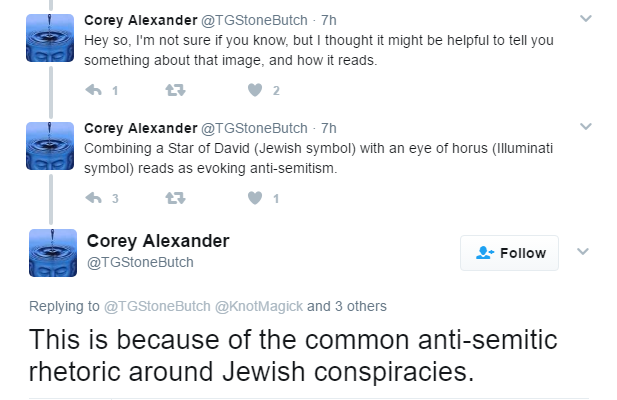 That sent me reeling. The last thing I wanted was to be spreading anti-Semitic messages. I immediately pulled my cover artist, Ash into the conversation.

We were both horrified, and she immediately began creating updated images.

The reason I’m telling you this rather long story is three-fold.

First and foremost: I want to give my sincere apologies to any Jewish readers and to the Jewish community at large. It was never my nor Ash’s intent to cause harm, and I believe the image has been removed from my current social media and marketing materials. New covers have been uploaded to both Amazon and Createspace, and by the time this post goes live, they should be approved.

If you find more of the old logo, please don’t hesitate to let me know, and I’ll be happy to remove it.

My second reason is to show authors how this kind of error happens, and how it can be corrected–because really, it doesn’t take much, and the alternative can be so incredibly harmful to both readers and our reputations as creators.

So, how did I end up with an anti-Semitic logo on the cover of my novel? 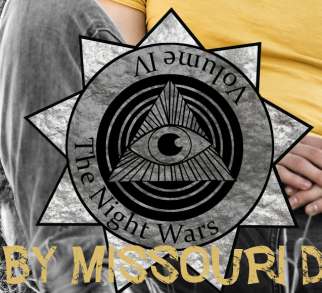 One of the running jokes in the series is that Montreal and Quebec as a whole always have to do things differently. With that in mind, I researched various badges for Canadian law enforcement, so using a different number of points seemed the obvious answer. Coincidentally, Canadian Corrections officers have a star shaped badge. We looked at several different badges for many organizations, but finally decided this one was the closest to what we wanted:

Due to the cropping, neither Ash nor I associated with the Star of David, even after she manipulated the image to show the top and bottom points. We were looking mostly at the shape and how well it translated to the cover, and what it looked like when scaled down to a preview image. We needed something that wouldn’t be overly complex, would still be recognized as law enforcement, and was quintessentially Quebec, or at the very least Canadian.

When we merged the two…well, you saw what happened.

Since Ash was in on the conversation almost from the start, she was able to work on a new logo right away. By the time I got home from my day job, she a new cover ready for both the ebook and print editions, a new banner image, as well as some promotional images to replace the old ones.

Here is the newly revised logo:

All in all, it was not a hard fix. It took about four, maybe five hours from the time the issue was brought to my attention to when I finished uploading the new images. I had to replace header images on Twitter, G+ and WordPress, the profile and background on Tumblr, and the covers on Amazon and Createspace. None of it was especially hard.

Yes, it is somewhat panic inducing as an author when something like this happens to a book, but it’s not a particularly difficult task to tackle. So, if you are a new author and run into this problem, here are some steps you can take.

If you have a copy of The Spider’s Web with the old logo and would like a sticker of the new logo to cover it, I will be ordering some soon and would be happy to send one to you free of charge.

Once again, I just want to offer my sincerest apologies if I’ve offended anyone.

If you have any questions about the book or the cover design, please feel free to send me a message. You can comment here, or if you would prefer to ask privately, you can also email me at author.sophiabeaumont (at) gmail (dot) com. And while I’m at it, I’m also planning two blog posts about The Spider’s Web, one about the mental health representation in the book, and one about the knitting, so if you have any questions about those topics, feel free to ask and I will address them here soon.