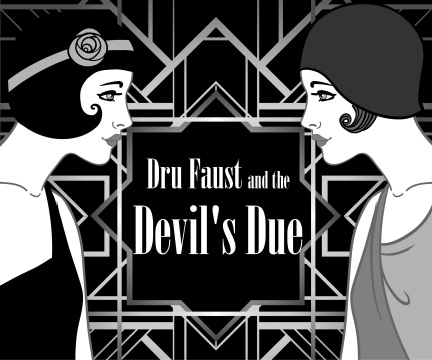 We walked back to the corner to catch the next streetcar, but I had a sudden idea, remembering how well stocked the liquor cabinet had been. “The party was on Friday night, wasn’t it?”

Alexandra came to a halt beside me. “Yes. Why?”

“Because it’s Sunday. No one will have collected last week’s garbage yet.”

“Do you really want to go searching through some stranger’s trash?”

“I couldn’t take the bottle in the house. They would have noticed. But if there were as many people at the party as you say, there should be at least a few empty bottles, right?”

Exchanging a look, we both veered away from the sidewalk, following a rutted path to the alley between the two rows of houses.

A low fence encircled the yard of the green and purple house. More lilac bushes bordered both the yard and the house, where the porch wrapped all the way around. Near the back door, two bins waited to be put out for collection the next day.

“Do you see anyone?” I whispered, eying the windows. She shook her head.

I unlatched the gate. The July afternoon was turning uncomfortably hot; most people had taken shelter indoors, where they could open windows or even find refuge in the breeze of an electric fan and some iced tea or lemonade.

Praying the tall bushes would be enough to keep me hidden, I crossed the soft grass in a few long strides, ducking my head below the level of the nearest bush as I quietly raised the lid on one of the bins.

The stench of old food slapped me in the face. I gagged, glanced at the large paper bag full of kitchen scraps, and quickly put the lid back.

“Jackpot,” I whispered, peering into the second container. Under a thin layer of old newspaper were at least a dozen bottles. Tossing the papers aside, I began digging through them with as much stealth as I could manage. They clinked softly and my heart thudded a little harder each time.

At last, I caught a glimpse of the tell-tale yellow label. I’d just closed my fingers around the neck of the bottle when voices made me stop. From one of the windows, I heard the woman giving some directions to the maid. I was wrist deep in glass and tried not to move.

A bee, drawn by the heavy fragrance of the bushes, buzzed near my face. I swatted at it with the lid of the bin, but it wouldn’t go away, zig-zagging back to my face every time. The lid caught one of the heavy flowering branches, raining pollen and petals down on me.

My nose itched. I held my breath and willed myself not to sneeze. The woman was still in the room. I could just see her over the top of the railing, looking at something on the table in front of her. If she looked up, she would see my pink, feathered cloche sticking out from among her lilac bushes.

Tears leaked out of the corners of my eyes. My lungs burned fiercely. There was nothing I could do.

The mighty sneeze rocked my on my feet. Stumbling, the metal lid crashed against the edge of the bin, sending a shockwave up my left arm. I wrenched my other hand free with a clatter of glass. One of the broken bottles sliced into the back of my hand.

“What was that?” asked a voice from the house.

I dropped the lid and bolted for the back gate. Alexandra grabbed my wrist and we raced off down the alley. We didn’t stop until we caught a streetcar two blocks away.

Panting, we clung to the back rail of the car, waiting as the attendant moved from passenger to passenger collecting the fee. Fishing the coins out of my purse, I waited with my injured hand and the bottle hidden against the wall. The attendant in her crisp dark uniform eyed us warily–especially me, and my bedraggled appearance–but took our fare and moved on. My eyes met Alexandra’s, and we both burst out into hysterical laughter at our close escape.

Drawing stares from the other passengers, I elbowed her in the ribs. My heart heart was still racing. I stared resolutely at the floor until we reached our stop, trying to keep my wild emotions in check.

Alexandra was nearly bursting by the time we disembarked. “Did you at least get it this time?”

I held up the empty bottle triumphantly. She let out a little gasp. The back of my hand was covered in dried blood.

“Don’t worry, it’s only a scratch. Come on. Let’s go back to the house. I want to compare this to the bottle Daddy has in the basement. And clean up a little.”

Elizabeth was there to greet us when we came in. She took one look at me and her cheerful greeting died on her lips. Brown eyes wide she asked what had happened. “You look like you’ve been in a fight. Oh, Dru, you didn’t get into a fight, did you?”

“Why would you ask that? You know I’m a perfect lady,” I said, tossing my short hair imperiously. Alex let out a very un-ladylike snort, but it was enough to make a thin grin stretch once more across my friend’s face.

“You should go change clothes before Mama sees you,” she hissed, quickly taking my bag and hat. I’d lost the hatpin somewhere in the bushes. The feathers would likely never be the same.

I handed her the bottle of Hudson Castle. “Take this down to the lab. I’ll meet the two of you there once I get cleaned up.”

Elizabeth gasped, grasping my injured hand. “What did you do?”

“It’s nothing, really,” I insisted pulling it back.

The two of them managed to sneak me upstairs to change without alerting Rose. Quickly, I stripped out of the filthy dress, cleaned up at the sink, and found a fresh outfit. Deciding not to tempt fate, I put on a simple blouse and skirt I typically wore for working in the lab, then hurried downstairs to join the others.

“Dru, you need to look at this,” Alexandra said as soon as I entered the basement. She and Elizabeth were crowded together under one of the bare bulbs over the work table, examining the empty bottle with a magnifier. Beside them was the bottle from the evidence box.

Alex passed me the magnifier. “Look here,” she said, pointing to the image of the castle. I focused the magnifier on the crisp, dark blue lines. Each stone was clearly rendered with fine hatch marks to create shadows. “What am I looking at?” I asked.

She pulled the bottle out of my hand and replaced it with the half full bottle from the police. “Now look at this one.”

I adjusted the magnifier, holding the bottle closer to the light. My brow furrowed. “It’s not the same. The printing on this one is smudged.” Instead of clear hatch marks, the shadows were little more than blobs of speckled ink.

“The bottles are different, too.” Elizabeth held them next to each other. While they were the same basic shape, made of smoky glass, the one we’d retrieved from Fifth Street had a shorter neck and a slightly wider body that was less tapered than the one in evidence.

“What’s it mean?” she asked, taking back the magnifier to give the bottle in her hand another look.

“My mother told me about this. There are some bootleggers out there who try pass off their homemade stuff as the real McCoy. They can charge more if people think it’s the real stuff, and not some kind of coffin varnish.”

“So one of these is actually brought in from Canada, and the other one isn’t?” Alexandra took the bottles, weighing them in her hands.

I nodded, pointing to the empty bottle. “This is the real one. You can tell by the quality of the printing. This one is just a copy, probably printed by reproducing a photograph of the original. See? It’s made of dots, the same way a photograph in the newspaper is, instead of lines. This one was made from an original plate, etched with the image.”

Elizabeth pulled the top from the empty and held it under her nose. “Are you sure about that?” she asked, recoiling.

I took the empty and tested it myself. The smell was just as strong and just as foul as the one Daddy’d gotten from the police.

“If this one is real, then why did Archie get sick?” Alex asked.

I examined the empty bottle again. There were only a few drops left at the bottom. “Hand me one of those test tubes.”

Elizabeth placed an empty tube in my palm. Very carefully, I poured the last remnants into the vial.

“Is there enough there for you to test it?”

“I’m not sure. But I can try. I can at least determine if it contains wood alcohol, and in what quantity. If it’s similar to the level we found in the other bottle, it will at least give us a place to start.”

“In the meantime, what should I do with this?” Alexandra produced a check for twenty dollars from her purse, made out to the Widows and Orphans fund.

I smiled. The signature was from Mrs. Howard White of 1588 West Fifth Street. Finally, we had a name to go with the whiskey. The Whites probably weren’t bootleggers themselves, but they certainly had connections to them, judging by that liquor cabinet. “I’ll hand it over to Mother tonight. I’ll tell her we ran into Mrs. White and she very kindly made a donation.”

“Dru, I don’t know how you do it. Even when you’re sneaking around, you still manage to make it for charity,” Alex laughed and even Elizabeth smiled.

“What can I say? It’s a talent.” We’d just have to see if that talent extended to catching the culprit behind the poisonings.