This is Winifred. She is one of the few examples of projects that I have knit completely from a pattern with no alterations.

The pattern is “Fruit Bat” in Knit Your Own Zoo. The knitting itself was pretty simple, but I desperately wish that the book had included a schematic of the pieces, and clearer directions on how to sew them up. I guessed, and I think that what I have looks okay, but probably isn’t right. 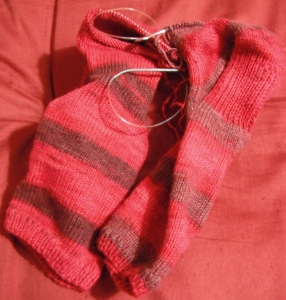 Current projects include the never ending red socks. I’ve been working on these for far too long, having originally cast them on back in April, I think. Since then they have had several Unfortunate Incidents, at least one of which has resulted in them being completely ripped out and started over from scratch. I’m finally down to the foot now, so hopefully these will be done before the end of the year.

I already have a whole list of patterns that I want to complete in 2016, a lot of them much larger or more complex than I usual do. Hopefully, I’ll learn a lot that I can apply to my own designs!