Hey guys, this is a pretty picture heavy post, just a heads up. I’m also having some issues with formatting on WP, so I apologize in advance if things look a little screwy. I’ve done everything I can to fix it!

The Lokibeast is very fond of socks.

For some reason, he has decided that they are his favorite toy. Nevermind that he has dozens of toys that he typically ignores. Nevermind that he lives in an apartment with a knitter. In his eyes, this is a sign that fortune smiles down on him–because if there is one thing he likes more than socks, it’s hand knit socks.

His fetish has gotten even worse since he discovered that by laying on top of my dresser he can open my sock drawer and take his pick. Which explains why I came home to find him chewing on my first ever pair of hand knit socks.

Normally, I’m not a fan of darning socks. I mean, eventually, they are going to get holes in them. It’s just the nature of the beast. They take a lot of wear and abuse. But since these socks are special, and a death by kitten would be far from natural causes, I decided that a little emergency surgery was in order.

Luckily, the damage wasn’t bad. He had only torn the connecting bars between two columns of knit v’s, and only 3 rows were affected. Unfortunately, I lost the picture I took of this.

There are only 4 things that you need for this: a yarn needle, a repair yarn, really good lighting, and possibly a magnifier. 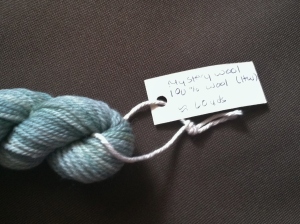 Since I had to substitute yarns, the most important considerations are fiber content and weight. Claudia Handpaints is made of 100% merino wool (superwash, I think, but I could be wrong). I don’t keep a lot of wool in my stash, but I did find a mini-hank that I was gifted recently of Black Bunny Fibers.

The Black Bunny is a decent match, but not great, so I decided to work from the wrong side of the fabric, with the sock inside out. here you can see the hole. Not that big, but it will only get bigger if it’s not fixed. If I had a better color match or a more complicated pattern to work with, then I would be working from the right side of the fabric, which is easier, but I don’t.

Working from the back is really tricky; you have to know how to “read” your knitting–to know how each stitch is formed and what it connects to, because for this technique to work, you have to mimic the existing stitches in order to rebuild the part that are missing.

I start a row or two below the damaged area, and 3-5 stitches to the side, to make sure that I am stabilizing the entire area. The last thing you want is to miss a torn thread and have your knitting ladder right under the nice repair you’ve just done.

Find a purl bump. Any purl bump. Now follow that strand of yarn on it’s path to get an idea of where you are going to go. Insert the needle, and follow the existing yarn up through the right side of the stitch, and then back down on the left.

Here is what the first stitch is going to look like:

I’m “copying” a brown stripe, which means that I need to follow the brown yarn from right to left. Up through the turquoise row, up through the teal. Then over and back down through the next teal bump and our original turquoisebump to make an upside down U shape. 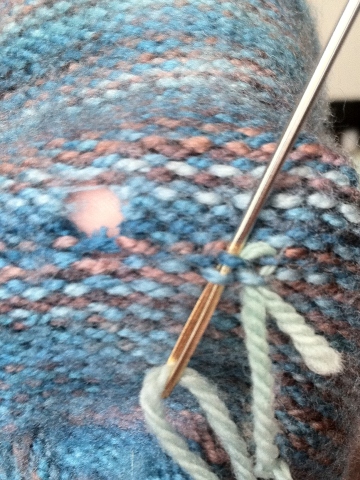 The second stitch will go up through the next turquoise bump, and then through the SAME teal bump that was on the previous downstroke.

Keep going, past the damaged area for 3-5 extra stitches. Then we’re going to do the same thing, but going the opposite direction.

After a little while, there comes to be a rhythm to it. People who are good at this are probably good at things like kitchener or duplicate stitch–really, all we’re doing here is duplicate stitch. In the long run, this will be more comfortable and better wearing than using a traditional darning method, which is intended for woven materials, and won’t stretch or give as the wearer moves.

I hope that was helpful! Let me know if there is anything that’s not clear.

And in case you were wondering, Loki has absolutely no remorse:

2 thoughts on “How to Fix Holes in Knitting, or Why the Kitten is in the Dog House”