Greetings, 21st century people! I am back. I’m rested. And I had a fantastic time!

This year was hands down the best Symposium since it started in 2012 (well, last year might have been pretty good, too, but I wasn’t there).

We drove down to Cincinati on Friday, arriving too early to actually check in to our hotel and change. We had lunch at a great 50’s themed dinner nearby, Hwy 55. The drinks were fantastic and I loved the theme, but the food was only so-so.

A little disappointing, but we were starved.

When it was finally check in time, we inspected our room (this becomes important later), changed clothes, and then drove across the freeway to the convention hotel. This year it was held at the Holiday Inn Eastgate, which was a much better venue than in the past. We were in a different part of Cincinnati than previously, and this area was laid out much nicer; it was easier to get around and there were more amenities near the hotels (more than one place to eat this time, plus there was a Joann’s and the new Jungle Jim’s was just across the way. More on that a bit later).

The panels started later than we were expecting, so we spent a couple of hours in the hotel lobby chatting with other congoers. I remembered to have Missouri take a picture of my latest costume:

Things got kicked off with a “tea stroll.” I had no idea what to expect, but it was tons of fun–tables were set up all around the enormous lobby, each representing a country. We could go from table to table, getting to know the various “air ships” (aka steampunk clubs from around the state and country) while sampling tea and sweets from the countries represented. Some airships had ties to the country they represented, some of them just had an interest in them. The theme for the entire convention this year was Around the World in 80 Days (one of my favorite books!) and they really went all out! There were several panels slated that dealt with things like minorities in steampunk, technology in countries other than the US and England in the Victorian era, and music and dancing from around the world.

Our first panels that evening were on women’s health and sexuality in Victorian England, and on Victorian Crime (basically, and early history of serial killers and forensics). Both were not only entertaining, but educational and inspiring, giving me several ideas for my current project. This was fortuitous, since we also had the first of a three-part writer’s workshop, headed by three authors and an editor for Tor.

It wasn’t until 11:30 that we made it back to the hotel, changed out of our costumes, and fell into bed…only to find them already occupied by critters of the six legged variety! I immediately went to the front desk to complain. By then, it was after midnight. Missouri and I were both so exhausted we could barely think. Our stay was refunded and we got a new hotel booked for the next night, but we were both so tired that the thought of packing everything up and moving at that point nearly brought us both to tears. We spent a restless night before packing up early, throwing a good portion of our belongings into plastic garbage bags provided by the hotel . Thankfully, the majority of our things touched neither the carpet nor the beds.

Our second hotel appeared clean as well, and we didn’t have any problems during our stay. It was also in a slightly more convenient location.

At any rate, Saturday was busy from the get go. Our panels included subjects like “Intrepid Victorian Women Adventurers,” “Women Writing & Publishing in Steampunk,” (by the same hosts as the writer’s workshop), “Victorian Secrets for Today’s Seamstress,” and “Victorian Fan Talk.”

The second session of the Writer’s workshop was hosted by the lovely and talented Leanna Renee Hibber, a familiar face from previous symposiums; Emilie P. Bush, who is a fixture at Symposium but someone I had never interacted with before; Taversia, who writes more sci-fi/futuristic steampunk was a new face for me, but provided valuable information for the break-out writer; and Diane Pho, woman who wears many, many hats, one of which includes that of editor for Tor.

Together the four of them were able to provide a great deal of information and answer a lot of questions. Of course, being me I had trouble asking questions–but I did a lot of listening and absorbing of information, and found all of their lessons to be valuable.

Saturday was so busy and we were both so tired that I forgot to take pictures of not only my outfit, but most everything else, as well. There was a group running around however, with various mechanized animals. The most visible was a monkey playing the piano: 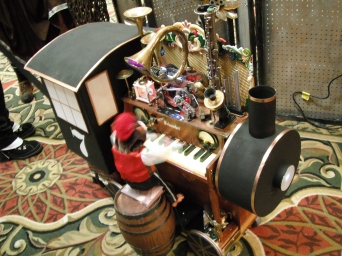 but there was also a ferret who bobbed his head up and down and was utterly charming.

With much regret, we decided to retire early that night, missing the ball, a reading we had wanted to attend, and a Q&A on the paranormal. We collapsed into our (clean, empty) beds, and didn’t move until after sunrise.

I was up early(ish), eating breakfast and editing the chapter I wanted to present at our final session, and attracting quite a few looks from the muggles staying in our hotel.

The morning started with a belly dance lesson. It was harder than I thought! I could get the hip movements all right, but my shoulders started to lock up about halfway through the lesson. I’m going to have to work on that! Luckily, there was a group giving $1/minute chair massages. I was able to squeeze one in before attending Leanna’s reading. I bought her newest book, The Eterna Files, and it sounds excellent! I started with her first series back in 2012 after hearing her read at the first Symposium, and her books have only gotten better since then. [note to self: do a review of her work for the blog]

We took one last tour through the Merchant’s room. Alas, nothing really called to me this year. My one complaint is that there’s been very little new blood in the vendors; we see a lot of the same things year to year, and this year there weren’t any vintage dealers. Those are usually my favorites. I did buy a second book, however (Tales of the Airship Neverland), and some tea.

Our last event was the critique phase of the writer’s workshop. Missouri and I both got some thoughtful feedback that we are working on implementing now that we are back in the real world.

Before leaving Cinci, we did make a stop at Jungle Jim’s International Market. This is not so much a grocery store as an experience. This is a new location, smaller than the original, but we still found quite a few of the European treats that we can’t get elsewhere. Alas, it appears that if JJ’s hasn’t done away with their Canadian section altogether, then they have at least omitted it from their branch location. I was on the hunt for Whippets (those would be like Mallomars for you Americans, or chocolate tea cakes for the Brits, but not quite either) to bring back to my mom, but couldn’t find any. I did however, find a suitable substitute as well as some chocolate for myself. And cheese curds. 🙂

We’ve been home for two days now. Unpacking was an adventure, as you can imagine. We still have stuff in the freezer and bagged up in the back of the car that we are afraid to bring in. But on the plus side, so far there are no signs that we returned home with stowaways. (Cross your everything that we can keep it that way!)

For me, Symposium is many things. There are aspects of fantasy, science fiction, history, literature, and costuming all bundled up into this amazing clockwork ball. I tend to lean more towards the history/literature side of things, but it’s so much fun to see the direction that other people go to it. I can’t think of any other convention where you have an equal number of highschool and college age kids, and people over the age of fifty. People come with their kids, or their parents, or their friends, and a good time is had by all. No matter where you fit on the spectrum, there is something that you’ll find interesting. Like music? Check out the rock concerts, or the traditional Japanese music. Like crafts? Make a squid or learn how to sew a bustle. If you’re more into electronics, there are classes on robotics.

Because that is the thing about steampunk–it is all about exploration and invention. It can go in whatever direction you want. It can grow and change and that’s all okay.