The turn of the century was an exciting time, and it’s one that’s been in my imagination since I was a kid. One of my favorite books in elementary school (and one that I fully intend to re-read) is A Little Princess. I used to have an edition that was both it and The Secret Garden in one volume, and I also had a paperback edition in which the illustration of Sara Crewe looked identical to one of my childhood friends. Now I have an old abridged hardback from 1916 with some lovely color illustrations. If you’re looking for a film version, then I’ll admit, I’m a fan of the more popular ones for a reason–the 1939 Shirley Temple version makes me cry every time, and I love the mischief and adventure of the 1995 version with Liesel Matthews. The idea of belief carrying you through the hard times is something that has stuck with me since the fourth grade, when I first read the book, and it’s something that I try to hang on to even as an adult. It’s not an exaggeration to say that Francis Hodgson Burnett shaped my childhood, since I’m also not sure how many times I read The Secret Garden. I’ve only seen one film version of that, which I enjoyed (1993 with Kate Maberly as Mary), but in general I prefer the book.

Another excellent book from about this same time (1909, actually, which places it right smack in the middle of the other two–1905 and 1911 respectively) is A Girl of the Limberlost. I think this book is relatively unknown to anyone who isn’t from Indiana or who has ties to it. It was recommended to me by a relative, and I love it. With similar themes to Princess and Garden, but with a more adult tone, Elnora is a poor teenager who works her tail off to get out of poverty and out of her abusive, neglectful mother’s house. Taking refuge in science and nature, she’s a smart girl who uses her wits and copious amounts of hard work to change her situation–and in the process, manages to start a slow repair of her relationship with her mother. It’s actually the second book in a series, but I didn’t realize that until I was writing this post! It can certainly be enjoyed on it’s own, as I clearly did, but if you’re like me you’ll be adding Freckles to your reading list, as well. I was also surprised to learn that at least 4 film adaptions have been made of the first book, and about as many of Limberlost. I’ve never seen any of them, though, so I can’t give you any recommendations. (I will say that both books are available as free or $.99 ebooks on Amazon.)

You know it’s coming. It’s huge. I can’t really not talk about it when mentioning this point in history. You know what it is.

Say what you will, I love this movie. The ship might have sunk in the end, but there’s a reason this film launched careers. Since pretty much everyone and their brother has seen it though, I won’t go on at length. I know that most modern stories of the Titanic have been reduced to Romeo and Juliet-esque romances. Eventually I want to find some of the things written around the time of the sinking to read, rather than the romanticized fiction of the 90’s, but for now, it’s entertaining and that’s usually what I look for in movies and novels–like in Titanic: The Long Night by Diane Hoh.

Okay, I’m done now. I’ll spare you. Instead, we can move on to the knitting and technology portion of the show! Er, post. Whatever.

The early part of the 1900s saw a lot of fast changes, and knitting was no exception. In the preceding years, it went from a matter of survival for the poor to a hobby for the middle and upper classes. The first knitting pamphlets, leaflets, and books of patterns were produced.

As the 1800s wore away and the 20th century bore down, it changed again by becoming mechanized. Suddenly, hand knitted socks weren’t the only option. One could simply purchase them cheaply at the store, made from finer, more consistent yarns than were produced at home.

The age of the handknitter wasn’t over yet, however, as first Europe and the North America and the rest of the world were drawn into WWI. Suddenly those cozy hand knits were in demand–thick socks, helmet liners, scarves and blankets were all needed, and the machines that once produced them were needed to manufacture military gear. Women, children, and invalids took up the needles at home to produce whatever they could to help their boys, either by knitting for them directly, or making things for the home and family, rather than purchasing them–saving supplies and industry for those whose lives might depend on it.

In homes around the world the needles were taken up–in schools, universities, community centers, and even at work. In hospitals, shell shocked and injured soldiers were treated with an early form of occupational therapy to increase their dexterity, calm their minds, and give the once active men something useful to do as they waited out their confinement: knitting. To keep up their spirits while at the needles, wives and daughters made up songs for their boys, and in the trenches the recipients did the same.

Want to see more WWI knitting, or try out a few patterns yourself? The Khaki Knitting book is available as a free PDF and includes dozens of patterns for soldiers from 1917. More detailed information on WWI knitting can be found here.

Just as the technology of machine knitting was improving, so were other areas: radio went from an offshoot of telegraphy to an independent form of sharing news over long distances, moving pictures became a novice art form, and typewriters became more user-friendly, with upstrike machines quickly growing outdated as they were replaced by tougher, more dependable models.

One of the forerunners in the visible type category was the Oliver. A particular favorite of mine (I admit it, I’m a sucker for the design and the “wings”), Oliver is to the typewriter what early Macintosh’s were to the computer: easier for the everyman to use (like being able to see when you’re about to run out of paper before the page falls off the platen), while at the same time making a sturdy machine that was amenable to amateur repairs.

Fun Fact: In the Murdoch Mysteries television show, William Murdoch uses an Oliver Typewriter. There is a slight problem, however, as the first season takes place in 1898, and in the second season (1899), he is using what appears to be an Oliver No. 5, which didn’t come out until 1907. He should have been using an early one of these, in all of it’s nickle plated glory:
Hands down, 1900-1940 is my favorite era for typewriters, with the bulk of my favorites falling somewhere between 1910-1929. To wrap things up, there are a few highlights. Click the images to find the source page. 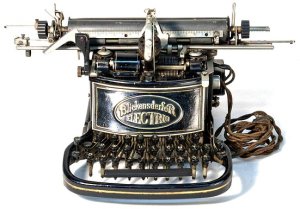 And here my roommate complains about the size of some of my typewriters: