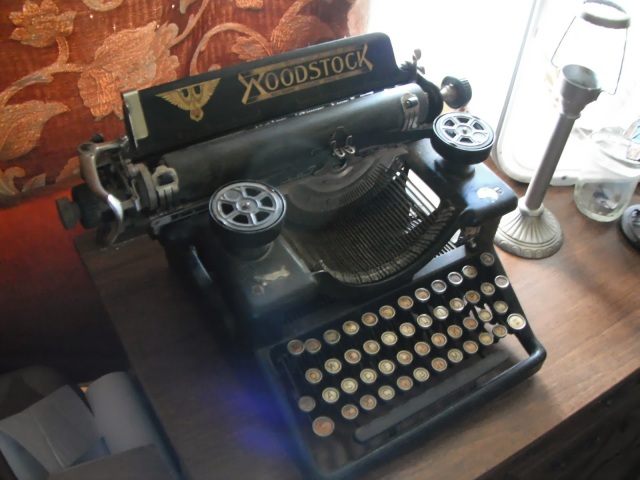 The newest member of my collection.

I haven’t had much time to play around with it yet, but so far it appears that everything works, though the shift lock tends to stick (getting better with use and a little oil), and one of the fraction keys doesn’t quite make it all the way to the platen, which is hard as a rock (which means it fits in well with every other typewriter I own. Since there’s no money for big repairs or supplies right now, I just use an extra sheet or two of paper and move on).

So this means that I have two machines that need tweaked before Nano, though honestly, this beast is so loud I doubt it will get much use. It also needs one of the feet replaced.

All of these photos were taken before cleaning, unless you count the time spent with the air hose before my dad gave it to me. Most of the big stuff has been cleaned up now, but it still needs some detail cleaning. But at least now it doesn’t look like you could catch plague from the keys. 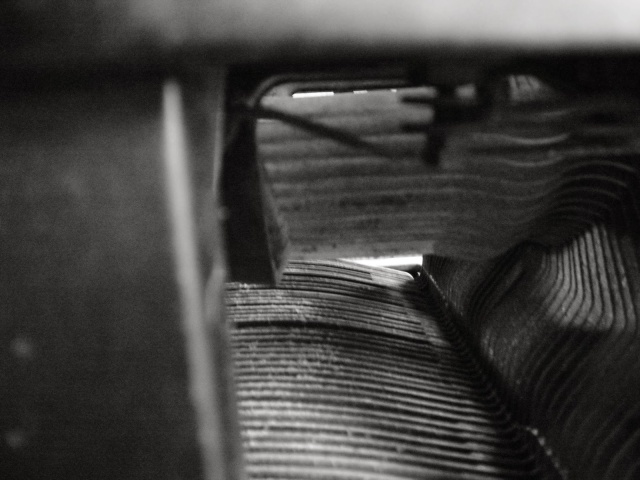 I love open sided machines. I’ve been wanting one for a while. I love being able to see how everything moves, but oh my goodness is this beast loud! I haven’t figured out what to call this one yet, but I’m thinking it needs a suitably rock n’ roll kind of name since it is a Woodstock.

I looked up the serial number, and it looks like this one is from 1921 (It’s a Model no. 5, for anyone who might be wondering). 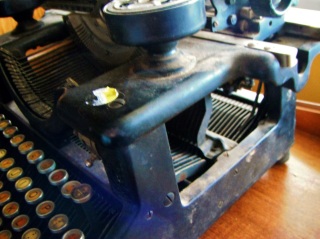 I’ve already wound on a new ribbon and done a couple of type-tests on it.Nothing special in terms of font, and after a little oil it’s typing almost as well as the KMM. In fact, it reminds me a lot of the KMM–big and sturdy with lots of charm, and reliable as the day is long. How many times to you just pick up a 90 year old machine and have it work like a dream?

The only thing that seems to be non functional at the moment is the paper guide. It’s current position is about 1/4 inch to the left of where the platen starts, so the paper creases a little when it’s rolled into place. I tried sliding it a little to the right with no luck, but I’ll try again when I have more time to play with it.

Of course, Caffrey and Henry will still be getting a work out for Nano. In fact, Caffrey was out for most of the afternoon while I was typing up outlines. Eventually the Skyriter and I will stop fighting long enough to get that draw band hooked up, so that I can have another portable to use for write-ins. It’s currently in time out.

The Woodstock, though? That one is on my good list. 🙂

6 thoughts on “Woodstock: Autumn of Love”