Have you ever seen those shows on PBS, or sometimes TLC or DIY or somesuch, where people research random old stuff they’d found? Glass bottles in the attic that belonged to a doctor who once owned the house, or a civil war rifle that belonged to a distant relative?

I love those shows. And I kind of feel like I’m in one.

A while back, we got a box from my uncle up in Canada, my mom’s brother. I’d only seen this box once before, but as soon as the packaging came off, I knew what it was.

This old wooden box was found among my grandmother’s things after she died. It’s full of old black and white photos of people who died long before I was born, and in most cases, before my mom was born. At any rate, we only know who a handful of the people in the pictures are. They range from the funny: 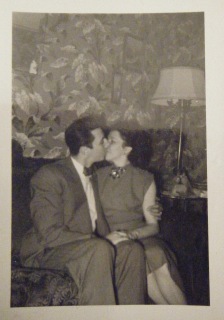 to the slightly creepy:

and hit everywhere in between.

This guy shows up quite a lot. Doesn’t he look like he’s about to whip out a Tommy gun and go looking for Capone? We don’t know who he is, but I suspect his pictures are some of the oldest in the collection.

This is one of the few people we could put a name to: Ettiene Cabinaugh. I don’t know much about him other than he was in the RAAF in WWI, and was shot down over France. We have a certificate and a letter from the RAAF commemorating his death, and a letter from one of his fellow soldiers that reads like a short eulogy, talking about his personality and the fact that his sister and mother would send him bottles of wine by baking it into loaves of bread. After his death, a ring was found in his possessions, intended as an engagement ring for his girlfriend. It was passed on to an aunt and eventually to my mom. It appears to be cut glass, but it’s still pretty.

My mom and I are going through family records, trying to piece together who is who and when some of  the photos were taken. From the dates, we know that they range between 1937, mostly up through the early 60’s, with a few from the 70’s and 80’s.

This one is familiar. I think I’ve seen this park before. At a guess, I would say that it is somewhere in Montreal, I think off of St. Catherine, but I couldn’t say for certain. Mom also thinks it is familiar, but thinks it might be in Windsor. Anyone else want to hazard a guess? 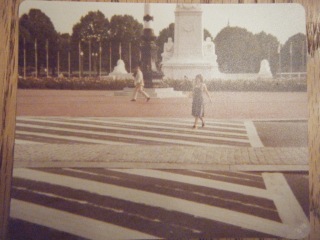