In the DVD player: When in Rome
Currently Reading: The Golden Fleece and the Heroes before Achilles

We finally had a break in the weather, so this morning I hauled Oliver and Henry outside to apply the rust converter. The ’53 is still in the garage, so I made do with a sunny spot on the front porch and spent about three or four hours taking apart the few pieces I was brave enough to attempt (and knew I’d be able to put back properly). He got a good deep cleaning (or as deep as I could get without taking off the carriage–something I have no idea how to do) and I put the converter on as many of the exposed pieces of metal as I could get to. I also took a ton of macro shots, the best of which are now up on Devart. 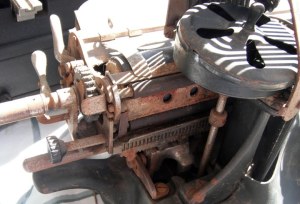 I put the converter on Henry, too, but it’s not as impressive of a result since Royal KMMs are black, anyway.

It should also be noted that this counts as my weight training for the day. I’d forgotten just how heavy those machines are! I think the Oliver is easily 25 pounds, the KMM has to be at least 30. Of course, I’m also a wimp with no upper body strength so that might be a bit of an exaggeration.

Now if only I can get my hands on a Dremel to polish some of it, since re-nickeling is kind of out of the question.

I’m off to upload the next chapter of Fortune’s Fight. At some point I’ll be scanning and uploading my journals for both Henry and Oliver’s restoration efforts.

2 thoughts on “A Good Day for the Tin Man”