I do not think that I am pretty. Not in the least. I avoid being in front of the camera. But I do make exceptions, like when I need to show off my latest knit creation, or when I’ve recently finished a particularly cool costume. Of course, it helps when you have a fantastic photographer working with you, like Alice.

The dress for these shots is actually a tank top (the black with pink paisley is the original top). It didn’t fit properly (i.e. I have huge hips and most shirts, even if they’re long, ride up to become belly shirts. This one was particularly bad, but also particularly pretty). I designed and hand-sewed the skirt, with the intention of dressing it up and also weighing down the hem to keep it in place. Originally I was thinking more of a tutu, but the more I drew and worked on it, the more a longer, more Victorian look seemed better. It’s not exactly historically accurate (not even close, really) but I kind of combined styles from around 1900-1910 with stuff from my own head and things from movies. 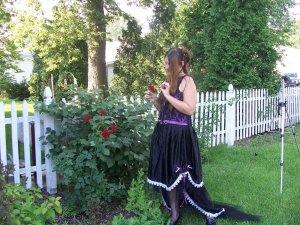 I really like the way it came out. It fits well and is pretty comfortable. Wearing the long sleeve black top and the corset over top was pretty hot, though. I drank a lot of water during that part of the shoot.

Unfortunately, out of the 200+ photos we took, we didn’t get any really good just frontal shots showing off the dress. It was definitely more of an art/fashion shoot, telling a story. Alice lives in an awesome Victorian, and we used the setting a lot in the shoot. We had a lot of fun pretending that I was about to kill my husband. There are several shots of me involving a knife and also some deadly nightshade she found growing in the yard.

These are just a few of my favorite images, the ones that show off my part of the work (the costume) the best. We also took some pictures in a local graveyard. We went to the older part of the cemetery and found some tiger lilies growing by a fence which we used as a prop. We left flowers on every grave we used as a thank you; most of them were so old that no one cleans or takes care of them anymore, except to mow around the headstone.

I also finished up an afghan I was working on, but I have yet to hook up my camera to the laptop. Or really get a decent picture of it. Flash photos on my messy bedroom floor don’t count, but it’s been raining every day for…A month? Two? So I haven’t taken any outdoor pictures (When it’s not raining, it’s 90 and humid).

As soon as I get the next flag for the Peace Project, I’m going to start stitching it all together. Squee!